skip to main | skip to sidebar

Or maybe next month's:

(an area in the Gulf of Mexico, the size of Massachusetts, with little oxygen.) This will be called ironic, but is nothing like that.

Posted by Marsha at 6:17 PM No comments:

Anybody who got a real glimpse of what Jan Cox was about will appreciate that Jacques Derrida was a tasty cookie--- store bought goods, but edible. A review of a new biography of the French philosopher at the link.

Posted by Marsha at 9:36 AM No comments:

Everything works for the progress of Life

Posted by Marsha at 9:38 PM No comments:

"We looked at all of the different modeling that goes on in the Galactic Center, including molecular gas, stellar emissions and high-energy electrons that scatter low-energy photons," said co-author Oscar Macias, a postdoctoral scholar in physics and astronomy at the Kavli Institute for the Physics and Mathematics of the Universe at the University of Tokyo whose visit to UCI in 2017 initiated this project. "We took over three years to pull all of these new, better models together and examine the emissions, finding that there is little room left for dark matter."

The group tested all classes of models used in the Galactic Center region for excess emission analyses, and its conclusions remained unchanged. "One would have to craft a diffuse emission model that leaves a big 'hole' in them to relax our constraints, and science doesn't work that way," Macias said.

Kaplinghat noted that physicists have predicted that radiation from dark matter annihilation would be represented in a neat spherical or elliptical shape emanating from the Galactic Center, but the gamma ray excess detected by the Fermi space telescope after its June 2008 deployment shows up as a triaxial, bar-like structure.

"If you peer at the Galactic Center, you see that the stars are distributed in a boxy way," he said. "There's a disk of stars, and right in the center, there's a bulge that's about 10 degrees on the sky, and it's actually a very specific shape—sort of an asymmetric box—and this shape leaves very little room for additional dark matter."

Far from considering the team's findings to be discouraging, Abazajian said they should encourage physicists to focus on concepts other than the most popular ones.

"There are a lot of alternative dark matter candidates out there," he said. "The search is going to be more like a fishing expedition where you don't already know where the fish are."

Posted by Marsha at 7:20 PM No comments:

The difference between stars and planets

One way to look at a real teacher, a person like Jan Cox, is that such figures are stars, in the galactic sense, and those who can hear them, those who typically lack the purpose to become more than followers, are like planets. Here is the text which prompted this picture:

From a recent article:

...
In 1835, the French philosopher Auguste Comte wrote of the unknowable nature of stars:

On the subject of stars, all investigations which are not ultimately reducible to simple visual observations are … necessarily denied to us. While we can conceive of the possibility of determining their shapes, their sizes, and their motions, we shall never be able by any means to study their chemical composition or their mineralogical structure … Our knowledge concerning their gaseous envelopes is necessarily limited to their existence, size … and refractive power, we shall not at all be able to determine their chemical composition or even their density…

He was, famously, wrong.

He couldn’t have envisioned the range of tools available to modern astronomers. It’s a beautiful thing that, nowadays, astronomers can not only learn about the compositions of stars via their studies of their spectra, but also probe the deeper mysteries, going all the way to the births of these colossal, self-luminous balls in space.

Such a appropriate description of the rare Real Teacher.

And about the authors of this article, an interesting way they reveal their own "planetary" nature, is by their unspoken presumption that they are more advanced than Comte. The actuality is that man's knowledge is always partial. So partial as to preclude any presumptions of superiority.


The attempt to summarize the significance of Jan Cox led me to recall his stress on the new, on attending to the edge of consciousness, as methods, to strengthen one's talent to remain alert. This peculiar alertness is blunted by words.

His was an ancient quest, a quest which when successful, raised for the modern westerner, a perhaps separate issue: how to remain, how to return, to a perspective bordered by quiet.

The quest starts and ends, with the physical. Probably.
Posted by Marsha at 1:18 PM No comments:

We're talking a long time ago 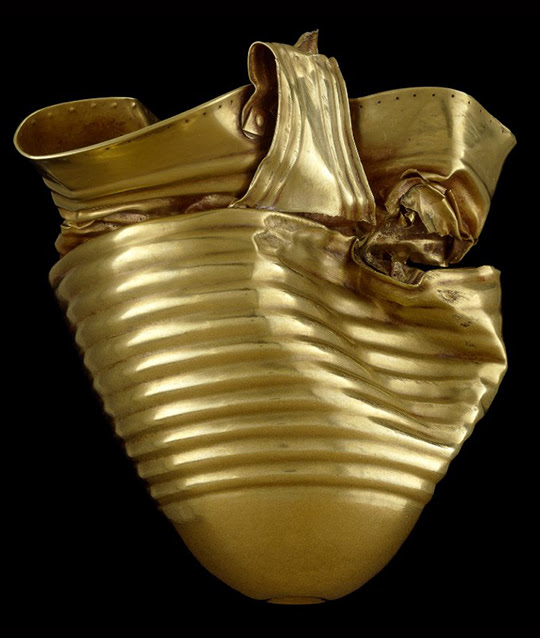 ."...[T]he dazzling Ringlemere Cup....was discovered on 4 November 2001. This golden vessel was made between 1700–1500 BC, and was found by metal-detectorist Cliff Bradshaw in the fields of Ringlemere Farm in the south of England...."
End quote.
Now, what jumps to mind is: what kind of cup has a conical bottom? That means if you set it down, the liquid is spilled.
And then I realized: these people didn't SIT DOWN. Because they didn't sit down, there was no need to set down a cup.
Their center of gravity, to refer to the maps of Jan Cox, was the physical, roughly, their pelvis. (This incidentally, reflects the fact their minds were MORE active than our own: they were smarter than we are, to generalize. But that is a different topic, and or, set of encyclopedias, and not our current topic.).
They were walking, running, riding, MOVING. Or by being still enough to invent, discover, astronomy, physics, useful gods, commas. None of this required the necessity of putting aside small amounts of liquid to be later recovered. Living in the present means consuming in the present.